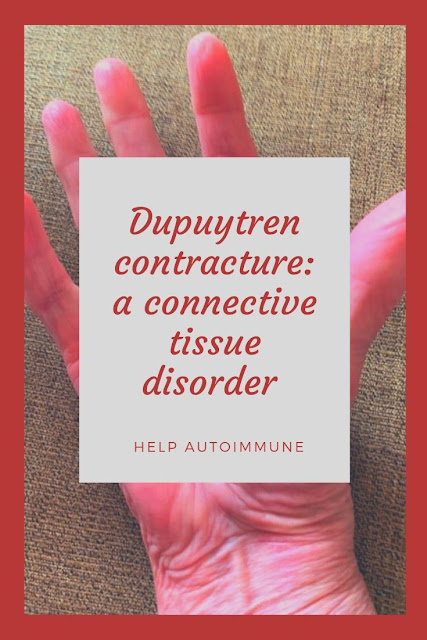 Dupuytren contracture is characterized by a deformity of the hand in which the joints of one or more fingers cannot be fully straightened (extended); their mobility is limited to a range of bent (flexed) positions.

The condition is a disorder of connective tissue, which supports the body's muscles, joints, organs, and skin and provides strength and flexibility to structures throughout the body. In particular, Dupuytren contracture results from shortening and thickening of connective tissues in the hand, including fat and bands of fibrous tissue called fascia; the skin is also involved.
In men, Dupuytren contracture most often occurs after age 50. In women, it tends to appear later and be less severe. However, Dupuytren contracture can occur at any time of life, including childhood. The disorder can make it more difficult or impossible for affected individuals to perform manual tasks such as preparing food, writing, or playing musical instruments.
Dupuytren contracture often first occurs in only one hand, affecting the right hand twice as often as the left. About 80 percent of affected individuals eventually develop features of the condition in both hands.
Dupuytren contracture typically first appears as one or more small hard nodules that can be seen and felt under the skin of the palm. In some affected individuals the nodules remain the only sign of the disorder, and occasionally even go away without treatment, but in most cases the condition gradually gets worse. Over months or years, tight bands of tissue called cords develop. These cords gradually draw the affected fingers downward so that they curl toward the palm. As the condition worsens, it becomes difficult or impossible to extend the affected fingers. The fourth (ring) finger is most often involved, followed by the fifth (little), third (middle), and second (index) fingers. Occasionally the thumb isinvolved. The condition is also known as Dupuytren disease, and "Dupuytren contracture" most accurately refers to later stages when finger mobility is affected; however, the term is also commonly used as a general name for the condition.
About one-quarter of people with Dupuytren contracture experience uncomfortable inflammation or sensations of tenderness, burning, or itching in the affected hand. They may also feel pressure or tension, especially when attempting to straighten affected joints.
People with Dupuytren contracture are at increased risk of developing other disorders in which similar connective tissue abnormalities affect other parts of the body. These include Garrod pads, which are nodules that develop on the knuckles; Ledderhose disease, also called plantar fibromatosis, which affects the feet; scar tissue in the shoulder that causes pain and stiffness (adhesive capsulitis or frozen shoulder); and, in males, Peyronie disease, which causes abnormal curvature of the penis.
Interesting video Bringing awareness to Dupuytren's disease: 3 minutes
FREQUENCY
Dupuytren contracture occurs in about 5 percent of people in the United States. The condition is 3 to 10 times more common in people of European descent than in those of non-European descent.
CAUSES
While the cause of Dupuytren contracture is unknown, changes in one or more genes are thought to affect the risk of developing this disorder. Some of the genes associated with the disorder are involved in a biological process called the Wnt signaling pathway. This pathway promotes the growth and division (proliferation) of cells and is involved in determining the specialized functions a cell will have (differentiation).
Abnormal proliferation and differentiation of connective tissue cells called fibroblasts are important in the development of Dupuytren contracture. The fascia of people with this disorder has an excess of myofibroblasts, which are a type of fibroblast containing protein strands called myofibrils. Myofibrils normally form the basic unit of muscle fibers, allowing them to contract. The increased number of myofibroblasts in this disorder cause abnormal contraction of the fascia and produce excess amounts of a connective tissue protein called type III collagen. The combination of abnormal contraction and excess type III collagen likely results in the changes in connective tissue that occurs in Dupuytren contracture. However, it is unknown how changes in genes that affect the Wnt signaling pathway are related to these abnormalities and how they contribute to the risk of developing this disorder.
Other risk factors for developing Dupuytren contracture may include smoking; extreme alcohol use; liver disease; diabetes; high cholesterol; thyroidproblems; certain medications, such as those used to treat epilepsy (anticonvulsants); and previous injury to the hand.
INHERITANCE PATTERN
Dupuytren contracture is usually passed down through generations in families and is the most common inherited disorder of connective tissue. The inheritance pattern is often unclear. Some people who inherit gene changes associated with Dupuytren contracture never develop the condition.
In some cases, Dupuytren contracture is not inherited and occurs in people with no history of the condition in their family. These sporadic cases tend to begin later and be less severe than familial cases.

SOURCES FOR THIS PAGE
NIH National Library of Medicine (NLM)
Posted by Good at 12:04 AM