John Kennedy was a fighter of Addison's Disease 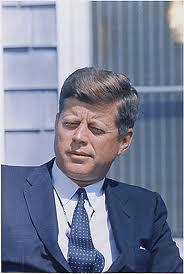 A lot of secrecy surrounded Kennedy's health while he was president.
He was possibly one of the first Addisonians to survive major surgery when he had back surgery.
Eunice Kennedy Shriver, one of John F. Kennedy's sisters, was also believed to have Addison's disease.
Kennedy’s early medical records show that he had constant infections during infancy, and scarlet fever, joint pain, headaches, and fevers. Afer this his health continued to decline.

In 1955 he began a series of treatments from Dr. Janet G. Travell who set up a combination of medications and exercise that allowed him to continue his political career.  Dr. Travell managed Kennedy's constant pain with cortisone shots and a movement regimen: using a rocking chair which was to keep the sitter active and using the muscles passively to rock, amongst other things. Interestingly she, Dr Travell, was the author of a series of groundbreaking books possibly one of the largest milestones in pain elimination ever written:
Myofascial Pain and Dysfunction, Vol. 1 The Trigger Point Manual, The Upper Extremities

Myofascial describes the connective tissue which surrounds muscle, ligaments, joints and nerves. The myofascia in the normal healthy state, is relaxed as it can move without restriction.  In injuries, stress and inflammation the fascia does not relax and becomes tight and develops trigger points and pain. The trigger point is a point of tenderness within each muscle and touching this point, in a certain way, causes referred pain that reproduces the patient’s symptoms.
Myofascial pain is usually described as a dull deep aching sensation which is worsened by use of the muscles.
Myofascial pain is very common in fibromyalgia sufferers.

Kennedy insisted that Dr. Travell remain his personal physician while at the White House, which caused a few eyebrows to raise. She was stepping into a lineage of physicians that were not only exclusively male but, since the 1920s, exclusively military. Although her mode of therapy was heavily scrutinized by conservative groups, the Kennedy family fully supported her and were convinced that without the medical expertise of Dr. Travell, Kennedy’s political career would have come to a premature end. From Janet Travell, MD


More information and support for people with Addison's Disease.
SOURCES: